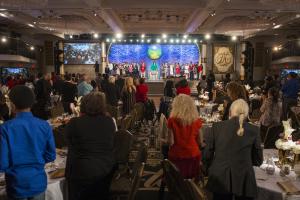 Young awardees at the Second Annual Love and Help Children Awards Banquet are acknowledged as they take to the stage of the historic Fort Harrison auditorium. 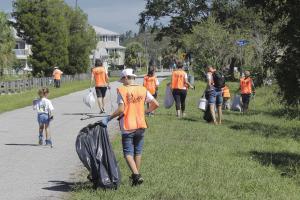 The Way to Happiness volunteers were cleaning up the Adopted Mile of the Pinellas Trail in Clearwater taking action to protect and safeguard and improve the planet.

With hate crimes statistics on the rise, we passionately support this important day and Dr. King’s approach to nonviolent activism.”
— Tanja Cranton, ED The Way to Happiness Assn. Tampa Bay

ST. PETERSBURG, FLORIDA, US, January 10, 2019 /EINPresswire.com/ — January 21st, 2019 marks the 34th year of the Nation’s longest-running parade – the St. Petersburg’s “MLK DREAM BIG” PARADE. Twenty one youth from The Way to Happiness Association Tampa Bay will walk with their float in honor of Dr. Martin Luther King, Jr. who exemplified the virtues detailed in the book, The Way to Happiness.

Hate crimes have been on the rise since 2015 when 102 were reported and 55.9% of these crimes were racial, according to the Florida State Attorney's office. 2016 saw yet another increase by about 33% per a report by the FBI.

Ms. Tanja Cranton, the Executive Director of The Way to Happiness Association Tampa Bay said, “With hate crimes statistics on the rise, we passionately support this important day and Dr. King’s approach to nonviolent activism. We are dedicated to bringing about the true joy and happiness of uniting together no matter color, race or creed.”

The Way to Happiness center in downtown Clearwater is open daily from 10am – 10pm. If you would like tour or attend complimentary workshops please call (727) 467 6961

About The Way to Happiness Association:

The Way to Happiness book was written and published by L. Ron Hubbard in 1981 as a nonreligious, common-sense guide to better living. Its purpose is to help arrest the current moral decline in society and restore integrity and trust to humankind. It is available in 112 languages, with some 115 million copies distributed in 186 nations. The campaign to distribute the book has been embraced by more than 257,000 groups and individuals and millions around the world have received the materials free of charge thanks to the continued sponsorship of the Church of Scientology. The Way to Happiness holds the Guinness World Record as the single most-translated nonreligious book and fills the moral vacuum in an increasingly materialistic society.