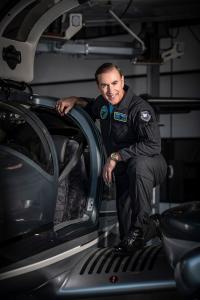 “If you want to learn more about the future of air travel, our friends at British Airways have got you covered.” – Brett Vance

LOS ANGELES, CA, UNITED STATES, July 19, 2019 /EINPresswire.com/ — As part of its year-long centenary celebration, British Airways is opening up a major interactive exhibit that will dive into both the history and the future of flight. Set to open in August, "BA 2119: Flight of the Future" will be revealed inside the Saatchi Gallery in London, offering visitors a glimpse ahead of what the future of air travel could look like over the next 100 years.

“If you want to learn more about the future of air travel, our friends at British Airways have got you covered,” states Brett Vance, aviation expert and Host of TV’s *Jet Jockeys, “It’s their 100-year anniversary this year; and to commemorate that accomplishment, the company has developed an outstanding exhibit in partnership with the Royal College of Art.”

Brett Vance is the creative mastermind behind TV’s Jet Jockeys, an upcoming docu-reality series focusing on pilots and the planes they fly. He also recently launched **AirLifeTimes, a new aviation blog that is sure to explode in popularity over the coming months.

“If you’ve ever returned home from a trip where you flew to your destination and your thoughts turned towards what air travel would be like in the future, this exhibit is perfect for you,” continues Brett Vance, “and chances are, a lot of other people are right there with you.”

Developed in collaboration with the Royal College of Art, the exhibit will examine how advanced jet propulsion, hyper personalization, automation, artificial intelligence, modular transport, sustainability, health and entertainment are poised to transform the flight experience as we know it today, over the next 20, 40 and 60 years ahead.

Along with the future, visitors will also be able to travel back in time via a multi-sensory, virtual reality experience called "Fly" that stretches all the way back to the imaginings of Leonardo da Vinci's ornithopter, to the Wright Brothers' historic flight on Kitty Beach, and BA's inaugural passenger flight from London to Paris August 25, 1919.

“If you’re an aviation enthusiast, this exhibit is a must-see,” concludes Brett Vance, “and if the technology evolution of the last 100 years is any guide, we are in for quite a ride!”

*Jet Jockeys is an upcoming docu-reality series focusing on pilots and the planes they fly. In it, Vance does for aviation enthusiasts what Mike Rowe of Dirty Jobs has done for the dignity of the trades and what Neil de Grasse Tyson of Cosmos has done for our sense of wonder about the universe. The sacrifices, accomplishments, and challenges of pilots are front and center in each episode, and leadership and bravery are commonly addressed.

**AirLifeTimes is a repository of the latest and greatest in aviation. The historical archives provide an insightful view to the past and each section of the blog provides a new way of viewing the thrilling world of aviation. The blog depends on its readers for the best in content, and the forum on the website encourages aviation fans to share their stories over the internet, which can include adventures riding in aircraft of all kinds.