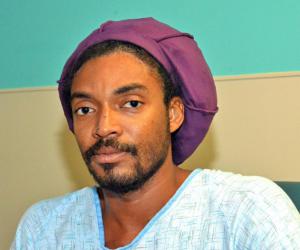 CAYMAN ISLANDS, August 13, 2019 /EINPresswire.com/ — Not many people can say they saw a pole go through their chest and lived to tell the tale. Thirty-year-old Nicholas Connor, was gravely injured when his car ran into a chain link fence, thrusting a steel pole through his body. A 911 call by a passerby, and the subsequent response by emergency services personnel and world-class surgeons at Health City Cayman Islands saved his life.

With the pole still in his chest and protruding through his back, Connor was freed from his vehicle by the fire brigade and taken for initial assessment at the George Town-based Cayman Islands Health Services Authority hospital.

There, E mergency R oom doctors stabilized Connor, who was rushed to Health City where a multi-disciplinary team of surgeons assembled within minutes.

How Doctors And Staff Worked Together To Save A Life

Dr. Binoy Chattuparambil, Health City's Clinical Director and Chief Cardiac Surgeon, got the early morning call: "I was at home sleeping. At 2:30 a.m ., I got a call from the government hospital that there was an urgent case. Somebody got into an accident and an iron pipe had gone through the chest – through and through."

On arrival at the hospital's 24-hour Level 3 Trauma Center, Dr. Chattuparambil said Connor "was lying on one side with a very big iron pipe through the chest and coming out of his back … he was awake and it was very scary for him and his parents, who were there with his brother."

Connor's injury was so unusual that despite many years of collective experience, this was the first time the surgical team at Health City had seen such a complicated case.

"I realized we didn't have much time to waste. Immediately, we had to do a CT scan – at least to know what structures were pierced by the pipe . The problem was, this pipe was projecting [out of his body] on both sides. He could not fit through the CT scan," Dr. Chattuparambil described.

Dr. Chattuparambil needed further help from the fire brigade to allow Connor to fit inside the CT scan machine.

Sedated, Connor was wheeled outside so that the Cayman Islands Fire Service team could cut more of the pole away from his body. He was then whisked back inside for the scan, which revealed that the pole had not damaged any of the major blood vessels but had badly injured his right lung and around six or seven ribs broken in multiple places. His right elbow was completely shattered.

The anesthesia team, led by Dr. Dhruva Krishnan, Medical Director, Senior Consultant and Cardiac Anesthesiologist, intubated the patient while he was lying on his side and isolated the injured lung.

"We were racing against time. He was stable but his oxygen levels could have dropped any time and this injury could have gotten worse. And, there were tubes and lines we had to place when he was in that very precarious position," Dr. Krishnan explained. "A special tube called w-mint was used to ventilate the left lung so [that] the injured right lung could be deflated to enable surgical repair."

While the main priority was extracting the pipe from the patient's chest, Dr. Chattuparambil called in orthopedic surgeons Dr. Niranjan Nagaraja and Dr. Ravi Kiran to treat the shattered ribs.

A long and complicated procedure repaired the lung and ribs, enabling Connor to breathe without mechanical assistance.

Dr. Krishnan praised the efficiency of the multidisciplinary surgical team and the remarkable efforts of the nurses and physiotherapists who worked overtime to keep Connor alive and stable.

Connor spent only two days in the Intensive Care Unit before discharge from hospital just a week later.

After his recovery, Connor himself marveled at the outcome: "The surgeons did a very good job repairing seven broken ribs and my punctured lung. They told me that I am a lucky man and I give thanks to God. It could have been worse."

Dr. Chattuparambil was delighted by the surgery's success. "I was really happy that we have a very good team to treat this kind of complex case, because these are the type of cases no one would have previously experienced . [In fact] I'm seeing this for the first time. But as a tertiary care trauma center, our multi-specialty team is available 24/7 to treat this kind of patient. It is a very satisfying case, as it was very difficult and went very well. I am very glad," he said.

As for Connor, he says he will remain grateful to the team for saving his life. "They encourage you and they show you how lucky you are, and how good God is to you. And you know, they are very nice people. I love them," he said.