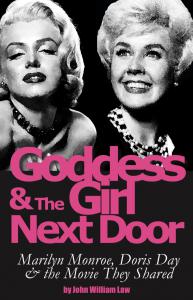 Goddess and the Girl Next Door

Goddess and the Girl Next Door Hits Bookstores in September 2019

In many ways their roles could easily have been reversed. Monroe colored her hair, had plastic surgery to change her nose and jaw while Day took her own steps to cultivate her wholesome image.”
— John William Law

LOS ANGELES, CA, UNITED STATES, August 23, 2019 /EINPresswire.com/ — One of the first books to look back at the career of Doris Day since her death at the age of 97 arrives in bookstores this September. With Day’s death in May 2019 she leaves behind a legacy in music, television and film. Like another Hollywood star, Marilyn Monroe, Day spent years as a top box office draw for much of the 50s and 60s. While Monroe died in 1962, Day would walk away from Hollywood life and a generation of moviegoers and fans were not even alive when she retired from films 50 years ago.

In fact Doris Day’s film career outlasted Marilyn Monroe by little more than five years. As icons of the silver screen in the 1960s Day and Monroe were flip sides of the same coin as leading ladies of Hollywood’s golden age. While Monroe delivered a movie star goddess that men wanted to sleep with, Day was the girl next door, the star men wanted to marry and take home to mom.

With that juxtaposition comes a new book from writer John William Law that chronicles the stardom of two of Hollywood’s most iconic actresses through one film production shared by both actresses.

Goddess and the Girl Next Door details the last days of Marilyn Monroe and the production of her incomplete film, Something’s Got to Give, and how the film would resurface a year later starring Doris Day under the name Move Over, Darling.

“Many people may not know that after Monroe’s death Twentieth Century Fox took the script to Something’s Got to Give and reworked it as a Doris Day picture,” says Law. “In fact, Day was actually approached to take on the role to replace Monroe after she was fired from the picture in 1962, but she declined.”

For Goddess and the Girl Next Door, Law’s research included analysis of both scripts and other production details for Something’s Got to Give and Move Over, Darling to look at areas where the story was changed to suit the star of the picture. “The scripts are very similar in many ways in terms of story,” says Law. “What’s interesting is some of the sexual innuendo and approach to the leading lady was altered. For instance, Monroe’s nude swim scene is one of the most famous events in the history of Something’s Got to Give, but there was no way Doris Day would have agreed to such a scene for her film, so it was removed for Move Over, Darling.”

Law adds that while both women had very different screen personas there were striking similarities between them. “While just a few years apart in age, Marilyn and Doris were nearly the same height and weight, and had nearly the same measurments,” says Law. “In fact, by 1962 they had even made the same number of pictures. Had Something’s Got to Give been completed it would have been Monroe’s 33rd picture, and Move Over, Darling would be Day’s 33rd film.”

Goddess and the Girl Next Door actually even takes that premise one step further, says Law. “In many ways their roles could easily have been reversed. Monroe colored her hair, had plastic surgery to change her nose and jaw and cultivated a sexy walk and voice to create her persona, while Day took her own steps to cultivate her wholesome image. Under different circumstances one could argue that Day could easily have cultivated the sexy image following Monroe’s path and Monroe could have remained as she was and aimed for a girl next door persona.”

The new book looks back at the lives and careers of both actresses with a focus on the dawn of the 1960s and the career paths of Monroe and Day. The author even details the moments when the two women would cross paths in Hollywood on various occasions.

Published in September 2019 with pre-orders available online, Goddess and the Girl Next Door is packed with photos in a soft-cover 342-page print edition, as well as an ebook version and an enhanced ebook on iBookstore with added content. It is available where books are sold and online at major retailers like Amazon.com, BN.com and Apple iBookstore.