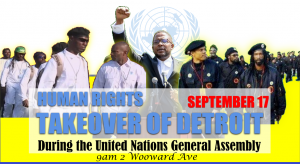 The Human Rights Takeover of Detroit

THE PEOPLE’S POSSESSION OF DETROIT

We will govern according to the power of consent granted by the people while ignoring those who no longer have consent.”
— Ramzu Yunus

DETROIT, MICHIGAN, USA, September 11, 2019 /EINPresswire.com/ — There is a Black Independence Movement sweeping across the United States that has already resulted in FBI and CIA involvement, massive police presence and violence as an independence referendum was first attempted in Detroit, Michigan. (Human Rights Takeover https://youtu.be/lcIwQod-niM) African-American groups are campaigning and organizing in cities throughout the United States to stand-up and exercise their human rights to “self-determination” and “remedy” by withdrawing consent from current officials, consenting to self-government, and giving themselves reparations from city assets.

The Human Rights Takeover of Detroit on Tuesday – September 17, 2019 – 9am-2pm at the Detroit City Hall Coleman A. Young Building, will set the precedence and initial action as the United Nations General Assembly begins in New York. Among those leading this charge, along with organizer Ramzu Yunus of Detroit, are notable Black Nationalists Hashim Nzinga, Chairman of the New Black Panther Party, Dr. Mustafa Ansari, Chancellor, of the Afro-Descendant Institute of Human Rights, and Malik Z. Shabazz, Esq., National President of Black Lawyers for Justice, stand in support of the event and endorses the efforts of “The People” to develop a new government. The Movement has already attracted international attention with nations such as Venezuela speaking-out in support. (Ambassador Julian Rivas Speaks on Black Independence https://youtu.be/U_1NQqZKBQc)

Judging from previous support by local residents, this event promises to be a success according to turnout. Will the consent or will of the people be acknowledged by current officials is another story. “As advised by an ambassador when I visited the United Nations, we will govern according to the power of consent granted by the people while ignoring those who no longer have consent. Yet, we will defend against any attempts at infringing our rights as the law gives us right to do” says Ramzu Yunus. -END-