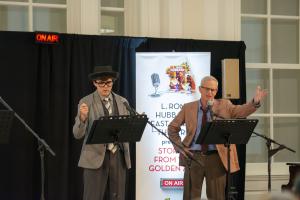 The L. Ron Hubbard East Coast Theatre August 2019 performance, The Professor was a Thief, at the Scientology Information Center. Their next performance of the Hubbard’s fantasy story Danger in the Dark will be on October 25th, at 6:30pm in the same Center.

This story is full of action, suspense and is captivating to the end. These live dramatic readings are a wonderful form of entertainment that uses the imagination and the senses.”
— Amber Skjelset, manager Scientology Information Center

CLEARWATER, FLORIDA, US, October 10, 2019 /EINPresswire.com/ — The L. Ron Hubbard East Coast Theatre will deliver an old-time radio-style performance of the fantasy story, Danger in the Dark, at the Scientology Information Center in downtown Clearwater, on Friday, October 25th at 6:30 pm. There is no cost to attend and light refreshments will be served. All are welcome.

“These performances are one of my favorite things to do,” said Francine, a regular guest. “I feel like I am back in the 40’s.”

Danger in the Dark was written by L. Ron Hubbard in May 1939 and was featured in Unknown magazine. Unknown was the foremost fantasy publication of its time, and its tales of mythic worlds, inward dimensions and strange journeys to the edge of the light became the model for much of the fantasy.

“The audience is in for a real treat. This story is full of action, suspense and is captivating to the end. These live dramatic readings are a wonderful form of entertainment that uses the imagination and the senses,” said Amber Skjelset, event organizer and Manager of the Information Center.

Seating is limited. To reserve seats or to learn more about the event, contact Amber Skjelset, Manager of the Scientology Information Center at 727-467-6966 or amber@cos.flag.org.

L. Ron Hubbard was among the most prolific and popular writers of the 20th century. Between 1934 and 1940, some 140 L. Ron Hubbard tales appeared in the pages of legendary pulp magazines—often as many as three titles an issue and bylined under some fifteen pen names. With 19 New York Times bestsellers and more than 350 million copies of his works in circulation, Mr. Hubbard is among the most acclaimed and widely read authors of our time.

Hubbard’s fantasy, Danger in the Dark concerns fortune hunter Billy Newman. Newman is not a man of physical strength or great courage—he gets by on his wit, wiles and good looks. And he’s had quite a good run—striking gold in the Philippines and buying his very own island in the South Seas. But there’s trouble in paradise. Suddenly, the entire island’s crops are failing and the people are dying.
Now Billy’s only hope to save his island is to muster up enough courage to face the very real Danger in the Dark.

The Scientology Information Center, located in the Historic Clearwater Building in downtown Clearwater, opened on July 11, 2015, and currently houses a gallery of audiovisual displays with some 400 videos. The Center is open to all and provides a self-guided tour showing basic Scientology beliefs, Scientology Churches around the world, ongoing social programs and the life of L. Ron Hubbard, Scientology's founder. The Center offers tours to the broad public and civic leaders; holds concerts, theatrical performances and receptions for the community; and opens up the use of its conference room to social, civic and non-profit groups. The Center is supported by the Church of Scientology Flag Service Organization.