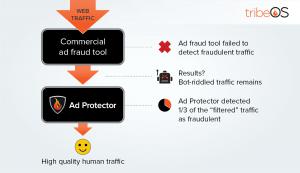 If this is any indicator of well-respected ad vendors in the Ad Tech ecosystem, there will ultimately be only two traffic sources available: junk traffic and quality web traffic delivered by tribeOS.”
— Matt Gallant

So it’s no wonder that ad fraud prevention claims have permeated the Ad Tech ecosystem. But do digital ad vendors truly walk the walk or just talk the talk? tribeOS put a trusted, globally recognized display ad vendor under the digital microscope via its patent-pending Ad Protector. And the results should immediately call for a universal warning of “buyer beware.”

BiOptimizers is a direct response, digestive health company founded in 2004. The company sells nine different supplements online including enzymes, probiotics, digest aids, as well as mineral and vitamin B products. The company consistently runs ads on popular platforms like Facebook and Google Display Network but suspected ad fraud was eating into their ad spend and adversely affecting conversions and performance.

What did BiOptimizers actually discover? Conclusive evidence that not all ad fraud protection is alike, and more importantly, spotty effectiveness at preventing the most lethal forms of ad fraud.

The respected display ad vendor tested ran their traffic through their own proprietary and branded ad fraud tool first. Next, that supposedly clean traffic was supplied to tribeOS. However, when that same traffic was tested via the tribeOS Ad Protector, within five minutes, 33% of the traffic was identified as fraudulent.

tribeOS Co-Founder Matt Gallant added, “I was shocked. One of the main reasons we chose this ad vendor was because of their ad fraud protection claims. Now we know that their ads run on our platform revealed our worst fears. Not only did the fraud exist but it was a significant part of the total ad spend. That is totally unacceptable, not only to our customers but to digital advertisers everywhere."

"Bottom line: If this is any indicator of well-respected ad vendors in the Ad Tech ecosystem, there will ultimately be only two traffic sources available: junk traffic and quality web traffic delivered by tribeOS."

For direct response advertisers interested in how tribeOS stops ad fraud and is cleaning up the programmatic ad industry’s traffic inventory, test the company’s no-cost ad fraud calculator. Within seconds, discover how many ad dollars are being robbed by ad fraud. Go test the ad fraud calculator for instant results now.

ABOUT:
tribeOS is a fully transparent display advertising platform that prevents ad fraud and helps advertisers and publishers run safe, secure, digital ad campaigns online. The tribeOS mission: increase digital ad campaign performance by utilizing the blockchain and a proprietary technology suite featuring Ad Protector and Gold Lantern tracking. tribeOS seeks to create the fairest, most transparent, and highly profitable digital advertising platform in the world. And, in so doing, end ad fraud while increasing accountability and ease-of-use for advertisers and publishers. https://www.tribeos.io/