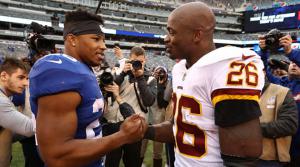 "Growing up, watching Adrian Peterson, I’m a big fan of his game. Even now, he's still a special talent. He's been doing it for so long.” – Saquon Barkley.

LOS ANGELES, CA, UNITED STATES, March 25, 2020 /EINPresswire.com/ — Eventually there comes a change of guard in every sport. Whether it is Michael Jordan who passes the torch to Kobe Bryant, or Bryant who passes the baton to LeBron James, each generation has their own superstar athletes who are the faces of their respective leagues. Now, the NFL is undergoing a quarterback’s transition from the likes of Tom Brady, Drew Brees and Aaron Rodgers to the new breed of Patrick Mahomes, Lamar Jackson and Deshaun Watson. But other league members are also in the midst of the changeover.

Adrian Peterson has been the benchmark for running backs in the NFL for a decade. But a new wave has arisen, a group that includes star Saquon Barkley of the New York Giants, whom the two men express mutual respect for each other. The Checkdown posted a video of when Barkley first met Peterson in his career via Twitter. Peterson retweeted the post and added, "@saquon is the truth. I see you grinding.” Barkley replied, “my dawg.” The two know who each other are and a natural admiration was displayed.

Barkley, whom the Giants selected with the No. 2 overall pick in the 2018 NFL Draft, immediately became one of the league’s best backs as a rookie. Barkley, whom the Giants drafted in the 2018 NFL Draft with the No. 2 overall selection, is one of the best backs in the league as a rookie right now. He was a Pro Bowler and was named both the Pepsi NFL Rookie of the Year and NFL Offensive Rookie of the Year awards.

In 2018, the former Penn State standout made up 2,028 yards from scrimmage and 15 touchdowns. Barkley rushed an average of 5.0 yards per attempt for 1,307 yards and 11 touchdowns, and he also made 91 catches for 721 yards and four additional touchdowns. Last season's injuries hindered Barkley's performance, but he still managed to put up more than 1,400 yards (rushing and receiving combined) in 13 games with eight touchdowns.

"Oh man, just tremendous ability," Peterson states. "Great vision, great feet. In my eyes, he's like the perfect sized running back. I feel like he has great qualities and has the talent to go along with it and you know, God willing, he stays healthy — I don't think he realizes yet how dominant he can be. He has the ability to be the best back to play the game."

Meanwhile, Peterson is generally considered to be the best running back in his era. In 2007, his 13-year NFL career began with the Minnesota Vikings, for whom he played with until 2017. The eventual inductee of the Hall of Fame, who spent the last two seasons with the Washington Redskins, ranks fifth on the all-time rushing list of 14,216 yards from the NFL. Peterson will enter for fourth place in the 2020 season 1,053 yards behind Barry Sanders.

Throughout his career, which is fourth all-time, Peterson, the 2012 NFL MVP and four-time All-Pro first-team, rushed for 111 touchdowns, one ahead of Chicago Bears legend Walter Payton. Only Emmitt Smith, LaDainian Tomlinson and Marcus Allen trail ahead on Peterson's career touchdown list.

"Growing up, watching Adrian Peterson, I’m a big fan of his game. Even now, he's still a special talent. He's been doing it for so long. To be able to watch him play live is definitely going to be something that I'm excited to see,” Barkley states. “He just runs through anybody in his way. Hopefully, he doesn't do that this week against our team. I guess you can say that I just love how aggressive he plays, or his aggressive nature that no matter if there's 12 guys in front of him, he's going to just try to plow them over. That's something that I can continue to add to my game, I guess you can say." To see this mutual respect between two soon to be legends is nothing short of extraordinary. Time to see where these two are further headed.