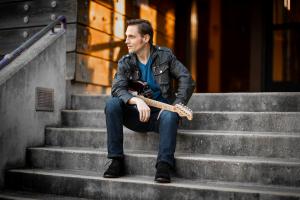 Alt-rock/pop singer-songwriter Michael Pinder introduces the music video for “Soar,” a song about letting go of the past and stoic resignation to the present

Alt-rock/alt-pop singer-songwriter Michael Pinder introduces the music video for “Soar,” a song about letting go of the past and stoic resignation to the present, and mounting to new heights of sangfroid.

Michael sums up his musical philosophy saying, “A great band and a great song will travel.”

The son of one of the founders of The Moody Blues, while growing up, Michael was drawn to music, like steel to a magnet. Studying music in college, he wrote constantly and developed his own unique style, influenced both by the past and the present. It’s a sound blending textures of the ’60s and ’70s with contemporary savors, yet always distinctive because of his voice and superb phrasing.

In 2006, his song, “Hang on Tight,” was first runner up in the U.K. Songwriting Contest, while his duo, The Pinder Brothers, was selected Best Band in Sacramento by KCRA. Since then, he’s released multiple albums and worked with the best musicians in the Bay Area, on songs like “Ordinary Man” and “Melancholy Sea.”

With his lush, graceful tones, his previous songs “Search For September” and “So Confused” presented listeners with multifaceted harmonic layers riding gorgeous melodies rife with polished arrangements. Now, with “Soar,” his incredible virtuosity is on full display.

“Soar” opens with Michael’s tender, melancholic tones on an acoustic guitar. As the music expands and gathers momentum, gentle strings enter atop a taut rhythm and low-slung bassline. The melody builds, taking on layers of complexity and resonance, moving from sad flavors to buoyant shimmering energy.

“Soar, soar above the clouds / Just stay next to me / I’ll never let you down / Take my hand and just breathe out.”

The music video, directed by Rob Fitzgerald, is set beneath grey, rainy skies, as Michael narrates the story of a young woman, who travels through sad tolerance of her situation to swelling self-assurance. As she flourishes, she discards reminders of the past, a stuffed toy, an umbrella, a raincoat, and a love note. In the end, she stands in an open field, exhales, and we see the beginnings of a smile as she takes on new vitality.
“Soar” is both beautifully wrought and elegantly refined, exuding an aura of assertive grandeur, all highlighted by Michael Pinder’s exquisite vocal delivery.