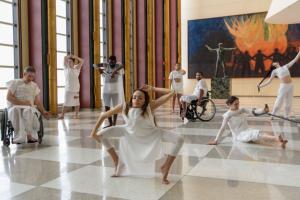 United Nations performance of ON DISPLAY

On December 3rd, to celebrate International Day of Persons with Disabilities, Heidi Latsky Dance leads 100s of individuals online in a performance.

In the current climate, where how you look can be weaponized against you, there's a renewed urgency for this work to continue.”
— Donald Lee, ODG Performer

NEW YORK, NY, USA, September 26, 2020 /EINPresswire.com/ — On December 3rd, 2020, to celebrate the United Nations’ International Day of Persons with Disabilities, Heidi Latsky Dance (HLD) will lead hundreds of individuals online in a performance of ON DISPLAY GLOBAL (ODG). First premiering in 2015, ON DISPLAY is a living sculpture court composed of dramatically different bodies from the worlds of disability, dance and fashion. A commentary on the body as spectacle, audiences are invited to actively stare beyond first impressions and perceived differences. Normally performed in-person at dozens of locations across the globe, the 5th annual ON DISPLAY GLOBAL will be entirely new, with participants appearing in a 6 hour Zoom performance that accommodates a breathtaking array of people from vastly different time-zones. Click here for access to a PRESS KIT.

Heidi Latsky Dance currently has 87 cities for ODG and plans to surpass 100 this year. Individuals interested in contributing to ODG may request information on becoming an “Ambassador” at ondisplay.us/join-us. An ambassador will help recruit their city’s local talent and determine how they are incorporated into the live stream presentation.

ON DISPLAY has a rich history. The work was originally commissioned by the NYC Mayor's Office in 2015 and performed in Times Square for the 25th anniversary of the Americans with Disabilities Act (ADA). 5 years later, HLD’s film SOLO FLIGHT was commissioned by Lincoln Center to celebrate the 30th anniversary of the ADA. The success of this recent digital presentation emboldened the company to expand ON DISPLAY GLOBAL to its largest incarnation yet. ODG is presented in partnership with NYU Tisch School for the Arts, NYC Mayor’s Office, and the United Nations.

ON DISPLAY GLOBAL has a stunning growth trajectory. What began with 2 cities, New York, NY and Hobart, Australia, in 2015 grew to an impressive network of 87 cities in 22 countries during 2019. ODG has inhabited more than 200 public and private spaces at once and with as many as 650 participants in a single installation. Beyond annual performances at the United Nations and NYU Tisch School for the Arts, other notable locations have included NYC’s Whitney Museum, Washington DC’s National Portrait Gallery, Shanghai Himalayas Museum, Boston’s Widener Library, and Seoul, Korea’s Oil Tank Cultural Park.

Heidi Latsky Dance (HLD), founded in 2001, is a New York-based, female-run non-profit dance company dedicated to disrupting space, dismantling normal, and redefining beauty through radical inclusion, innovative performance, and challenging discourse. The group, physically integrated since 2006, has been called a “milestone in contemporary dance” by Dance Magazine. They’ve received commissions by the Joyce Theater, Whitney Museum, American Dance Festival, and more. Their films have screened with Central Park Summerstage, Kennedy Center, Harvard University, Jacob’s Pillow, and TedxWomen. The company presented the world premiere of D.I.S.P.L.A.Y.E.D at Baruch Performing Arts Center, underwritten by the CUNY Dance Initiative and the Gerald and Janet Carrus Foundation (2017). With support from the DCLA’s CreateNYC Disability Forward Fund, the Inaugural Art & Social Justice Award from the Shelley & Donald Rubin Foundation, and Google, this event was incredibly unique. From 2017-2020 with Craig H. Neilsen Foundation funding, they created a pilot program for individuals with spinal cord injuries. This included a program partnership with Mount Sinai Hospital (2020) culminating in multiple performances throughout NYC and a documentary titled We are right here.

The company has virtual offerings that include the creation of three volumetric videos/holograms of two disabled women and Heidi herself, the result of a new augmented reality collaboration with Loren Abdulezer, CEO of Evolving Technologies Corporation. Recent awards include a 2020 MAP Fund grant for Suspended Disbelief, a project altering rules and creating language for artists and technologists to re-imagine accessibility as well as a Canada Council for the Arts project during 2020-21. For more, visit heidilatskydance.org.