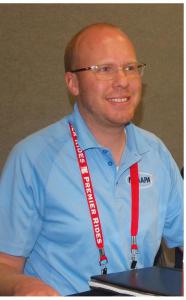 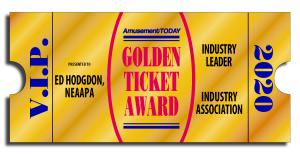 There’s no doubt NEAAPA is stronger because of Ed’s efforts. … He’s an all-around great leader for the organization. He is so valuable to the association, it’s almost a lifetime position…”
— Eric Anderson

SACO, MAINE, USA, September 27, 2020 /EINPresswire.com/ — Amusement Today (AT), a leading trade publication of the amusement industry, announced its annual Golden Ticket Awards today, honoring the New England Association of Amusement Parks and Attractions (NEAAPA) and its Secretary Ed Hodgdon with its Golden Ticket Industry Leader: Association Award. For more than two decades, the prestigious honors have been the most sought-after awards in the world of amusements and themed entertainment.

“This has been a challenging year, but there is still a tremendous amount of hard work going on. Amusement Today didn’t want to miss an opportunity to recognize those who continue to move the industry forward,” said Publisher Gary Slade.

Through the global crisis, the amusement industry has demonstrated its strength through its innovation and resilience. Stepping away from its traditional core categories, the Golden Ticket Awards have seized the moment to acknowledge strong decisions through a series of Industry Leader Awards.

In a press release AT said, NEAAPA immediately leapt into action on the onset of the health crisis. By weekly networking meetings, members from across numerous states communicated, advised and collaborated to make the organization — and each facility — stronger and more informed. At the helm was NEAAPA Secretary Ed Hodgdon, marketing and IT manager at Funtown Splashtown USA, Saco, Maine. His diligent efforts and organization skills led the association.

“Ed is such an easy guy to work with,” said NEAAPA President Eric Anderson, who is president at Quassy Amusement & Waterpark, Middlebury, Conn. “There’s no doubt NEAAPA is stronger because of Ed’s efforts. They go way beyond his secretary duties. He’s a historian of everything in the past, so we don’t repeat mistakes. He helps board members as they come on board. He’s an all-around great leader for the organization. He is so valuable to the association, it’s almost a lifetime position as no one ever wants to see Ed move on.”

AT noted that Quassy was the first park to actively engage guests during the COVID-19 shutdown. It used coloring pages, constant press teases and information about a new attraction arriving to keep its audience involved even when guests were not permitted to walk through the gates. The park’s efforts kept pushing a positive and uplifting reminder to families throughout the shutdown via its social media channels and news releases.

“Global events may have caused a reimagining of the Golden Ticket Awards this year, but in these times, it is still a way to acknowledge the positives that are so desperately needed. Amusement Today is thrilled to recognize so many achievements,” said Tim Baldwin, Golden Ticket Awards communications coordinator.

Amusement Today was founded in 1997 and covers international amusement and waterpark news and trends. In its 23-history, it is a five-time winner of various awards from the International Association of Amusement parks and Attractions (IAAPA). The full Golden Ticket Awards issue is available to read online and download for free at: AmusementToday.com/digital and GoldenTicketAwards.com