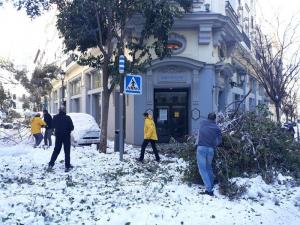 Volunteer Ministers began their disaster response at the National Church of Scientology in Madrid and moved on to shatter solid blocks of ice, shovel snow, and haul away branches throughout the district. 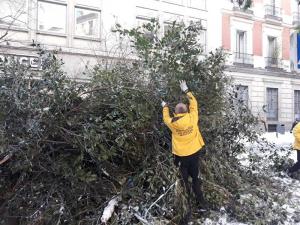 Huge branches were felled by the storm, blocking the narrow streets. 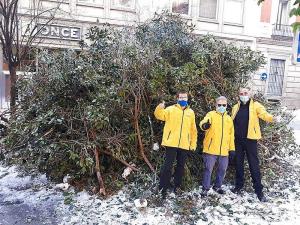 A team of Volunteer Ministers from the National Church of Scientology of Spain took on clearing the street and entrance of Spain’s National Organization of the Blind. 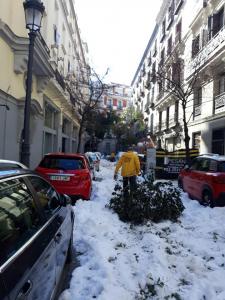 The narrow streets in the center of Madrid were blocked with snow, ice and fallen branches.

LOS ANGELES, CALIFORNIA, UNITED STATES, January 19, 2021 /EINPresswire.com/ — It was the most violent storm to hit Spain in half a century, burying areas of the country in up to 20 inches of snow and bringing the nation’s capital of Madrid to a standstill. Rail service was suspended. Some 12,500 miles of roads were impassable. More than 2,500 motorists were trapped in their cars, some for up to three days before being rescued. Even with the military deployed to open roads using heavy equipment and more than 3,500 tons of salt, only 700 major highways could be opened to traffic.

Madrid was incapacitated. Much of the city is a network of small streets inaccessible to heavy machinery. Key sections of the metropolis remained blocked, including Madrid’s Neighborhood of Letters, where the National Congress and Church of Scientology are located.

Compounding the crisis, 300,000 doses of COVID-19 vaccine were due to arrive three days after the storm struck in a country hard hit by the pandemic.

Volunteer Ministers from the National Church of Scientology of Spain mobilized to clear away snow, ice, fallen trees and debris. “The Congress of Deputies is just a few blocks from our Church,” said Ivan Arjona, president of the European Office of the Church of Scientology for Public Affairs and Human Rights and the Spanish NGO Fundacion MEJORA—Foundation for the Improvement of Life, Culture and Society. “That was one reason we felt we had to move quickly to help them gain access to their offices where they needed to deal with the crisis.”

After the blizzard, temperatures plummeted to record lows, turning the snow into masses of solid ice. The Volunteer Ministers worked on, enabling local residents living in the neighborhood to again move freely.

“Our volunteers were very happy to contribute to the neighborhood, and so were our neighbors. It has been a total team effort with all shop owners in the Bario de las Letras helping clear the sidewalks and roads, to bring life back to this area," said Arjona.

The Church of Scientology Volunteer Ministers program is a religious social service created in the mid-1970s by Scientology Founder L. Ron Hubbard. It constitutes one of the world’s largest independent relief forces.

A Volunteer Minister’s mandate is to be “a person who helps his fellow man on a volunteer basis by restoring purpose, truth and spiritual values to the lives of others.” Their creed: “A Volunteer Minister does not shut his eyes to the pain, evil and injustice of existence. Rather, he is trained to handle these things and help others achieve relief from them and new personal strength as well.”

The Scientology Volunteers of Madrid are headquartered at the National Church of Scientology of Spain at Calle de Sta. Catalina, 7, dedicated in 2004 by Mr. David Miscavige, ecclesiastical leader of the Scientology religion.