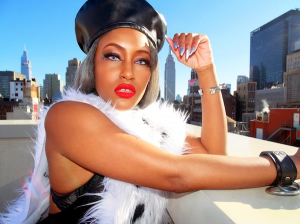 UNITED STATES, January 23, 2021 /EINPresswire.com/ — New York, NY – Just a few months ago, trap/pop recording artist and songwriter Chantae’ Vetrice released her single, “Run to the Money” and quickly received great acclaim from publications such as Wonderland Magazine, who premiered her single and likened her to empowered music mega-stars such as the likes of Cardi-B, Meg Thee Stallion, and Mulatto. Now on February 5, 2021, Chantae’ Vetrice is back with an all-new single entitled “iGet It” the third single in her plans to aggressively release new music throughout 2021.

Born and Bred in New York, Chantae’ has since lived, made music, and pursued fashion and modeling all over the United States and around the world. She has worked alongside some of the industry’s top producers and has been honored as one of The Source Magazine’s Top Rising Artists of 2020. Chantae’ Vetrice and is currently being sponsored by world-renowned beauty brand Manic Panic NYC.

In 2019, Chantae’ Vetrice released her debut single “Vain.” She took a small hiatus to focus and refine, then In September 2020, Chantae’ released her Trap/Pop infused song “Run to the Money” and she doesn’t plan on stopping as she continues to build her catalog all while she prepares to release her new single, “iGet It.”

“This is a track for the boss-ladies who are not letting the pandemic stop them from getting what they want,” says Chantae’. Despite the restrictions and challenges of COVID-19, Chantae’ has continued to record her debut EP and write new music. For this reason, “iGet It” is true to Chantae’s ambition, work ethic and drive as an emerging artist/musician.

“I want to share much-needed fun, energy, and life with the world”

“iGet It” will be released February 5, 2021, on All Digital Streaming Platforms via 2MaroMusic Imprint distributed through TheOrchard/Sony